Densification: What is it? And why is it a crucial part of the concrete polishing process?

It has always amazed me how you can take an ugly piece of concrete and transform it into a beautiful polished concrete surface like in the image below... this is an ugly storage shed concrete floor with a beautiful finish just under the surface 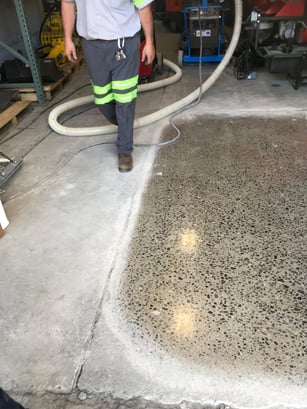 A crucial step in the concrete polishing process is concrete densification. Let’s talk about...

But first,… just a short history lesson in polished concrete and then a little chemistry 101!

Years ago, in the early 1990’s contractors & architects realized that it was possible to polish concrete. So, they started experimenting with different methods and quickly started seeing what beautiful results could be achieved.

they were missing a crucial step in the process. That step proved to be Concrete Densification, strangely enough,... It turns out that concrete is not hard enough or dense enough to retain the shine, they had to make the concrete harder & denser so it could retain that nice finish...

What was the answer? 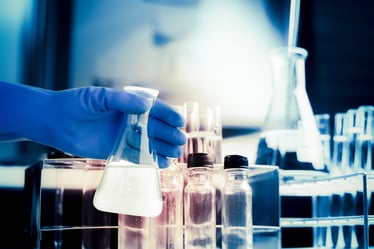 Smart manufacturers, contractors, and chemists, in those years began experimenting with different compounds, chemicals, minerals, and substances that would react with the minerals in concrete to harden & densify the surface resulting in concrete holding the shine produced as well as stopping the floor from “dusting” and preventing, or at least reducing the floors susceptibility to staining and ability to quickly remove spills.

Just a quick note,... long before the 1990’s there was at least one company that I know of that has been using Sodium Silicate to densify and dustproof concrete for over well 70 years but to my knowledge, they were never using their material as part of a polishing system…


My humble opinion... most densifiers are good, and they work well... But I’m a believer is Sodium Silicate, the reason is this, you can go inspect concrete floors that were densified with Sodium Silicate 70 years ago and see that they are still, all these years later, performing just like they were when originally densified.

Will all the other more recent, easier-to-work-with densifiers work as well as Sodium Silicate? Probably… but we need to wait 40 – 50 years to find out!

WHAT DENSIFIERS ACTUALLY DO... this is interesting...

All of these chemicals (densifiers) do the same thing to one degree or another: they react with the Calcium Hydroxide or “Hydrated Lime” in the concrete growing what many say are crystals in the concrete, others say it is not crystals but are actually a kind of “paste” in the pores of the surface of the concrete. (Crystals, paste...Who cares right?) … Either way, the result is a very dense, abrasion-resistant, impact-resistant surface that holds the finish well, it permanently stops the “dusting” of the concrete, and greatly impedes the absorption of liquid and stains.

Here is what basically happens,… when concrete is placed, a month ago or a hundred years ago the chemical reaction of "hydration" took place, making the concrete hard… In this process, when water is added to cement powder, it reacts, and forms compounds called Calcium Silicate Hydrates (CSH) this is what makes the concrete hard.

There is a byproduct of this process though,... This byproduct is the production of an inert material that is in all concrete, some say as much as 25% of the slab consists of this material and it does nothing, it adds no strength to the slab, it is just there. It is the Calcium Hydroxide, or “Hydrated Lime”

Here's the cool part... when you introduce any of the densifiers mentioned above to the surface of the slab it reacts with the Calcium Hydroxide and turns it from this useless byproduct into what makes the concrete strong, hard, and dense. Calcium Silicate Hydrate (CSH) is the chemical that originally was produced in the hydration process making the concrete hard when the concrete was originally placed. How much stronger? Up to 400% greater abrasion resistance and 30% greater impact resistance.

How this process helps with Dusting, Longevity of the Finish, Stain and Liquid Resistance.

If you looked at the surface of a concrete slab under a microscope it looks very porous like a sponge, a rock hard, brittle sponge. When you “Cut” or grind the surface with say, a 40 Grit diamond and look at it again under the microscope, it is even more porous and brittle, …

So, what happens is when concrete is walked on driven over or scrubbed, those micro edges are easily abraded, they break off and float into the air. This is what causes the dusting you get from a slab as well as the dulling of the polished finish, because the micro edges of the polished surface are vulnerable and break off so easily...

But, when you flood the floor with densifier and it is allowed to sink in, remain in a fluid state for at least a half hour and probably longer, the chemical reaction takes place, growing crystals, paste, filling in the micro-fractures, tinny holes, microscopic pores. this growing CSH then bonds with the original CSH producing a surface that is incredibly hard and dense and will retain the polished surface & eliminate dusting and will do this with little maintenance. (Not no maintenance)…Little maintenance.

Now the concrete is “Densified”, it is 400% harder, far less likely to chip or spall, there are no micro fractures, edges, pores to break off and cause dusting and dulled finish. Now the concrete is in its “Goldilocks zone “ porous enough to allow moisture to pass through the surface and evaporate (You want this to happen) but it is dense enough to impede the quick absorption of liquid giving you time to clean it up and avoid staining... Now the concrete (With low maintenance) will keep its shine, its dust proof condition and will look beautiful and will last for many decades.

All because of densification. 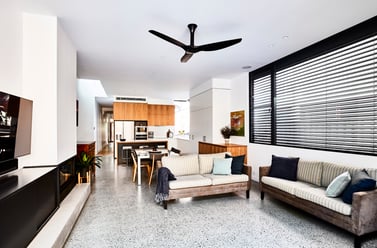 IF YOU WANT MORE INFORMATION ON EQUIPMENT NEEDED TO POLISH CONCRETE, CLICK HERE

Can you polish a floor without densifying? YUP, they did in the 1990"s... the image below shows a highly polished section of concrete with NO Densification. (it has a great clear reflection) but, this great reflection will not last... because It's not densified. 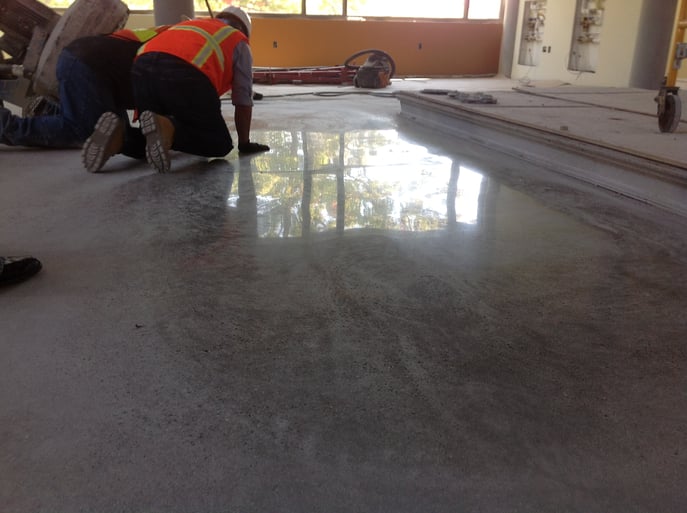 if you have any questions about concrete polishing or the equipment used to polish concrete or any other equipment used in the surface-preparation field, contact us at Bartell Global and one of our team members will be happy to help.