How to dispose of concrete slurry correctly 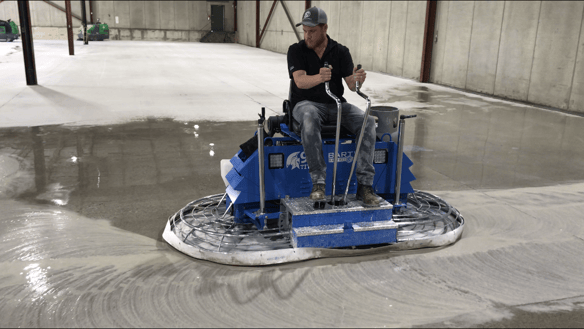 “I hate grinding wet!” How many times have we heard that? Guys say, “grinding wet is messy, it’s hard on my equipment, it is also harder to read the floor as I am grinding and polishing. And, the resulting slurry can not only be a lot of work for me to get rid of, but it is considered “hazardous waste” and I must be dealt with it accordingly.

CLICK HERE FOR INFORMATION ON WET VS DRY CONCRETE GRINDING

While it is true that concrete slurry is all the negative things mentioned above. It is also true that when a contractor is informed and properly prepared to deal with concrete slurry, it is not that big of a deal, the reason is that there are now a number of ways to deal with slurry that was not available not that long ago. Methods that allow you to do some pretty cool stuff, like quickly separating water from solids allowing you to reuse the extracted water in the slurry to continue the grinding process as well as methods to quickly solidify the slurry.

Let’s look at a few ways to deal with the concrete slurry challenge, both the old methods and new and see if one works better for you and your jobsite conditions.

OPTION ONE: Settling and evaporation pits.

This is really “old school”..... what contractors have historically done is dry the slurry out in drums, bens or lined pits. This was the common method not that long ago. but the serious downside to this method is depending on where you live and the time of year, it can take literally months for a slurry to dry out enough to be considered not hazardous waste due to water content. With the many other options that are available now, it becomes quickly clear that this “old school” method is just not practical in at least most cases.

These are systems that force the slurry through a series of filters at a pretty impressive 20 gallons per minute. And, out the other end comes water clean enough to recycle back to the grinding process lessening the total amount of water used on the project. Then at regular intervals you pop the filters free and release the concrete solids, these solids are the consistency of hard-packed clay and are easily solid enough to not be considered hazardous waste due to its moisture content, later we will cover other reasons concrete slurry might be considered hazardous waste even if the water is removed.

These are great systems, easily mobilized, and work really well. though their initial cost is definitely not cheap, however, the maintenance and filter replacement costs are pretty low. And, when considering the benefits in time saved, water recycling, and the avoidance of fines this method quickly starts to look pretty attractive.

This is a really interesting process that is highly valuable to the concrete polishing and grinding contractor as well as concrete cutting and core drilling contractors. Why? Well, what is concrete slurry made of? Mostly water and concrete grindings. these grindings traditionally have been hard and time-consuming to separate. but not anymore.

By adding a Deflocculant (mostly PH reducing acids) to concrete slurry you can almost immediately separate concrete grindings from the water it is suspended in, allowing the contractor to quickly recycle the water back to the concrete grinding surface, cutting down on total water consumption.

What happens when adding the Deflocculat to the concrete slurry? It is pretty cool, I will never be confused with a chemist but, basically, all the “stuff” floating around in concrete slurry is called the “colloid complex” or “Deflocculants” and a lot of this material will eventually settle to the bottom given time. But, a considerable amount will never settle and stay suspended indefinitely in the slurry. Why is this? the reason is that all these tinny particles are negatively charged. And, what happens if you try to attach two negative sides to two magnets? they repel each other. So, just like little magnets, all those particles repel each other, they cannot “stick” to each other so they can then get bigger and allow gravity to take over and settle these larger pieces to the bottom.

When adding a Deflocculant to the slurry it almost immediately removes the negative charge from the particles! Now, these suspended concrete partials are like millions of little magnets sticking to each other at incredible speed, allowing them to become “flocks” (large chunks of material) right before your eyes and quickly settle to the bottom leaving clear water on top, not clear enough to drink but, pretty clear. this is a really cool process to watch.

As cool as this process is, it does not bring the resulting concrete paste to the point that it is dry enough to not be considered hazardous waste. Another step is necessary, and we will consider this step next.

These are simply powders that you sprinkle on your slurry on the floor and push around with your squeegee and it quickly solidifies to the point that it is no longer viscous enough to be considered hazardous waste.

These are specially designed wet vacuums that pick up the slurry then filter the concrete grindings out and returns clean water to the grinder or core drilling bit to be recycled for the continued grinding, cutting or drilling process. These have their positives and negatives. For one, it is slow, so it is probably not the greatest choice for a grinding/polishing project, it is awesome for concrete core drilling as it is compact and there is very little water used so you have a nice clean slurry free work environment.

So, while wet grinding is not a lot of contractors favorite thing to do, at least, thanks to some great chemists and equipment manufacturers the question of how to effectively dispose of concrete slurry has been addressed very well in recent years making it not the problem it was in the past.

WORDS OF CAUTION ON CONCRETE SLURRY

just a couple of related points to be aware of

In the USA, where I live we have the EPA (Environmental Protection Agency) and they are responsible for the protection of the environment. This is the organization in the USA that sets the rules for dealing with things like Concrete slurry.

Other countries will have their own governmental organizations for these rules. For instance Europe has the EEA (European Environmental Agency), England has the EA & DEFRA and so on.

While their guidelines are oftentimes very similar when dealing with Hazardous waste, there will be some differences. so, always check with your local authorities when disposing of materials like concrete slurry to insure you are in compliance.

the following are a couple additional points that we here in the US must comply with and might apply to you where live and work as well.

These are identified in the EPA’s T.L.C.P. regulations. There they identify 8 heavy metals that, if present in the grindings, must be mitigated before disposal. (California in their successful effort to be a “stick in the mud" (or slurry in this case) has added an additional 9 heavy metals to this list. what is the answer if your grindings were tested and found to have any of these toxins? It is this, there are manufacturers that provide systems that not only solidify the slurry but, in the process, will INCAPSULATE the heavy metals as well, making it legal to dispose of concrete grindings normally.