Is Your ShotBlaster Dropping Too Much Shot?

A good quality Shot Blaster can power through tough jobs, fast. Typically, you shouldn’t have many issues if the machine is well maintained and cared for, but just like any piece of equipment, stuff can happen and things need to be fixed.

Sometimes you’ll need to call in a professional to assess and fix the situation but sometimes there are things you can check yourself, before calling in maintenance, to help save some time and money.

If you’re using a Shot Blaster and notice that it’s dropping too much shot, (sometimes referred to as "carpeting") that’s a sign that something isn’t working right, and not fixing it will only create more issues and decrease production.

Fortunately, there are a few things you can check before you need to call someone in.

If your Shot Blaster is dropping too much shot and not recycling it effectively, there is most likely an issue with the vacuum suction. If the dust and debris isn’t being vacuumed effectively, it will prevent the shot from rebounding properly.

Start by checking the filters to see if they need to be changed or if there is any sort of obstruction. This is the most common issue and once corrected, the Shot Blaster and vacuum should go back to working effectively.

also, check the hoses themselves for wear, holes and rips as this will lessen your CFM resulting in decreased efficiency in both reclaiming shot and debris removal.

If you find after checking the vacuum that you’re still having issues, the next thing to do is…

The blast-wheel inside the Shot Blaster, which is what propels the shot towards the ground, is made up of a few different parts- however there are 2 or 3 main parts that can become worn out with use and need to be replaced as part of typical machine maintenance and upkeep.

In some machines the blades and impellor are attached as one part, and the control cage is separate. 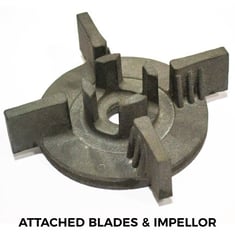 SPE Shot Blasters have separate blades and impellors. The reason for doing this is because the blades generally need to be changed more frequently than the impellor and control cage. Separating them helps to prevent the user from unnecessarily replacing the impellor when the blades need to be replaced, but the impellor is still in decent shape. 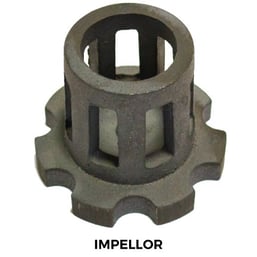 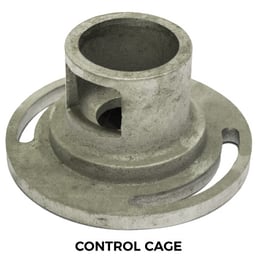 When these parts become worn out, the shot can't be propelled effectively onto the blasting surface, which prevents it from rebounding the way it's suppose to.

In this case, simply changing out the parts with excessive wear, will get your Shot Blaster up and running efficiently.

If the blades, impellor and control cage are in good shape, but your Shot Blaster is continuing to drop too much shot, the next thing to do is…

The seals at the bottom of the machine that touch the ground are there to help maintain appropriate suction needed for the Shot Blaster and the vacuum to work effectively.

If these seals are worn-out it will affect the suction power and result in dropping too much shot.

In this case, changing the worn-out seal with a new one will help ensure proper suction.

using the incorrect shot can make your machine not recycle shot effectively. this happens mostly on smaller, 110 and 220 single phase machines that just does not have the power to run bigger shot. so, on a 110 machine you will most likely never use anything bigger than #S390 and probably #S230, #S280 or S330 is most appropriate.

With shot blasting you have the option to not only choose the size of your shot but you also have the option of adding Grit to the shot. this really helps on some removals but you never use 100% grit. What you do is add it to your traditional round shot at NO MORE THAN 25%,  the reason is that you need the efficiency of the round shot "dragging" the grit along with it to effectively rebound the shot with the grit. so, using to much grit can interfere with the effective "bounce" of the round shot causing you to drop shot.

CORRECT AMOUNT OF SHOT IN THE HOPPER

this is a simple one, you want to keep the shot level in the hopper just under the removable screen. too little or too much reduces the efficiently of the shot rebound.

As belts wear they can start to slip or stretch becoming loose and lessening the RPM at the blast wheel causing you to drop shot.

REDUCE THE AMOUNT OF SHOT TO THE BLAST WHEEL

Sometimes operators will want to increase their production rate by increasing the amount of shot being released onto the blast wheel, if to much is released it will start to accumulate on the concrete surface and that shot interferes with the following shot starting a chain reaction of fouled shot and you drop shot or "carpet" the floor.

most shot blasters will have an amp meter and a sticker next to it telling you how many amps to NOT EXCEED, this is so that you don't blow a breaker, harm the equipment but also so you don't drop shot.

if your control gauge is set to the incorrect setting you could drop shot as well. most manufacturers will tell you to set it at the 8:30 - 10:30 position (looking at it like it is a clock) see your owner manual for the correct setting on your machine.

last, some materials are just not a good candidate for shot blasting. these are soft materials even some materials that are somewhat soft shot blasters will not work on and the machine will drop shot. the reason is that you do not get an effective "bounce" off the surface. ever dribble a basket ball on carpet or grass? same principle.

Most of the time, you’ll be able to fix the Shot Blaster from dropping too much shot by checking the vacuum, the blades, impellor, control cage, correct shot and mix of grit, and making sure all the seals are undamaged and working properly, and fixing anything that’s worn out.

If you’re new to Shot Blasting, are unfamiliar with how to fix those parts, or if you’ve checked the things listed above and they are in good working order but your Shot Blaster is continuing to drop too much shot, it’s best to call an expert and have someone come and look at your Shot Blaster.

Lastly, it’s important to note that when working with heavy duty equipment it’s always best to err on the side of caution so no one gets hurt or the machine doesn’t get damaged.