What is Shotblasting? - Shotblast Education Month

I’m sure you’ve heard the term “Shot Blasting” before in the surface preparation industry. It refers to the blasting category in general, for all machines where shot is used. We frequently use the terms Shot Blasters or Shot Blasting when talking about our equipment for simplicity and recognition sake, but the technical term for the type of shot blasters we promote and sell are “Enclosed or Closed” Shot Blasting machines. Enclosed / Closed, refers to the fact that the shot remains within the frame of the machine and is vacuumed into a disposable bag for safety and efficiency.

The concept is really quite basic, the “abrasive shot”, or simply just “shot”, (the tiny steel balls that come in various size) is flung at an incredibly high speed against the concrete you are blasting, using centrifugal force. All this is referring to is the force that causes the steel shot balls that are moving around the internal wheel in a circular path, to move out and away from the centre of the path (wheel). - Think of yourself holding a glass of water straight out from your body, and then spinning really fast in one spot. The water will be forced out of the cup away from you as you spin. The faster you spin, the grater the force - it is the same basic concept.

The internal wheel has paddle type blades that guide the shot in the right direction. The abrasive shot is fed onto this wheel in a way that ensures it travels along the radial length of the blades, where it is then thrown by centrifugal force in a high velocity stream at the concrete surface to remove existing coatings like paint, epoxy, glue etc., or clean and prep the concrete surface for future flooring or finishing.

As a result, enough kinetic energy (this just refers to the energy of an object in motion – the steel shot rotating around the wheel and out) built up to cause the abrasive shot to rebound off the ground, where it is recovered and re-entered into the Blasting process. 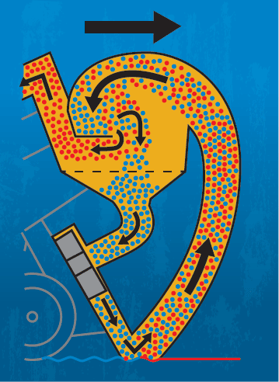 This all happens within the enclosed space of the Shot Blaster, hence the term, Enclosed Shot Blasting.

Eventually the shot will break down into dust and is sucked out with the debris left over from the concrete surface through an attachable dust extractor system into a disposable bag.

The dust extractor system also assists with the reclaim cycle.

The suction causes steady air flow to enter the machine through the brush screen at the real of the cabinet, which flows across the work surface, picking up the broken down shot, dust and debris. It is then carried up the reclaim duct, through the separators, and into the attachable dust extractor system.

Makings sure you are using a properly certified dust extractor system while Shot Blasting, that complies with the new OSHA Regulation changes, is key in ensuring a clean and safe work environment.

This process all happens in one continuous cycle. Over time the shot breaks down and new shot needs to be added to the hopper.

If you have any other questions about Shot Blasting, feel free to check out our other blogs or contact one our product experts.